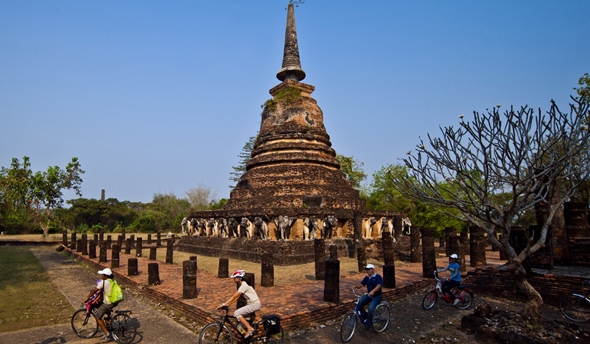 Si Satchanalai Historical Park located at Tambon Mueang Kao, a.k.a. Kaeng Luang, which is 11 kilometres off Amphoe Si Satchanalai towards Amphoe Sawankhalok or some 550 kilometres from Bangkok. With an area of approximately 45.14 square kilometres covering Tambon Si Satchanalai, Tambon Sarachit, Tambon Nong O, and Tambon Tha Chai, The ancient town of Si Satchanalai, formerly known as Mueang Chaliang, is located Ban Phra Prang, Tambon Si Satchanalai. It was renamed during the reign of a king in the Phra Ruang Dynasty when a new administrative centre was established to replace Chaliang, Ruins of 204 monuments out of 215 places have been discovered within the park. Major places of interest include :

This Ceylonese style temple sits upon the north of Chotwithithong Road and stands out with its bell-shaped chedi with 3-tiered square bases that sit on the rows of elephant sculptures acting like carrying the chedi. This intriguing elephant artwork can also be discovered in old towns under the Sukhothai Kingdom which are Kamphaeng Phet and Si Satchanalai.

Also known as "Wat Phra Borommathat Mueang Chaliang" or "Wat Pra Prang" as it's called by the locals, dates from the early 13th century, making it one of the oldest temples in the Si Satchanalai area. The large corn-cob prang is a strong clue that the temple was started by the Khmers, but it was expanded and modified all through the Sukhothai and Ayutthaya periods. This is perhaps the best place to start a tour of Srisatchanalai.

The temple is arranged in a linear plan running from east to west. At the eastern end is the ordination hall, a modern building built on the foundations of a much older structure. You can see the old foundation stones at the rear of the building, opposite the gate to the central complex dominated by the soaring prang.

The Chedi Chet Thaeo got its name from its seven rows of chedi which were built in many styles like Lankan, Pagan, and Srivijaya and is claimed by Prince Damrongjanuphap that this temple could be where they kept the bones of the royal family during Sukhothai period.The significant creations here are the chedi with the lotus shape, the Wihan and 33 subordinate chedi located.

This is a hilltop temple within the old town of Si Satchanalai. The prominent landmarks are the principal circular stupa and a laterite mandop, where its base is high and square in shape, with a pointed arch roof and stairways leading up to mondop. This is locally known as the Chaomae La-ong Samli Shrine. The temple is accessible from Wat Kaeng Luang via 2 stairways in the front and sideways. The steps leading from the foot of the hill to the temple are also made of laterite blocks. There are traveller's pavilions along both ways.

Located 200 metres west of Khao Phanom Phloeng, Wat Khao Suwan Khiri basically sits on an other hilltop of the same range. A huge bell-shaped laterite chedi stands on a 5-tiered plinth base that served as a circumambulation platform. There are 4 niches in 4 directions enshrining images of the Buddha. Around the mast of the chatra - umbrella - on top of the chedi features stucco figures of Buddha walking,which are similar to those at Wat Chang Lom. Behind the principal chedi houses a circular stupa encircled by a laterite wall.

It is located within the city wall, not for from Wat Chedi Chet Thaeo. The prominent landmark includes the principal laterite circular stupa,which the bell-shaped part has already collapsed. A staircase in front leads from the wihan's back  porch to the bell-shaped body where a Buddha image is enshrined. In front of the principal chedi,there is a wihan with front and back porches.There are 5 staircases leading up to the wihan. The wihan's columns and temple's boundary wall are constructed from laterite.

Located 200 metres from Wat Chang Lom,the layout plan of Wat Suan Kaeo Utthayan Noi include buildings encircled by a demarcation wall,front gate,back gate,and main chedi in a lotus-bud shape. In addition,behind the wihan features a shrine in the form of a mondop with a pointed arched roof enshrining an image of the Buddha subduing Mara.

Adjacent to Wat Suan Kaeo Utthayan Yai,Wat Nang Phaya is famous for its delicate stucco reliefs on the remains of the northwestern wall of the 7-roomed wihan or image hall. The principal circular stupa is supported by a circumambulation base. The relic chamber of the chedi housing its core decorated by stucco relief is accessible by a set of stairs from the front. The wihan building is made of laterite blocks with front and back porches. The wall was made into slit windows to let in light. The exterior face of the wihan's southern walls are decorated with highly elaborated stucco of creatures-half man half monkey - running. However,part of it has already been destroyed. Other elaborated stucco includes plants and angels in adoration bearing the art style of the early Ayutthaya period.

Wat Chom Chuen,which is 400 metres east of Wat Phra Si Rattana Mahathat,is situated by the Yom River. The prominent landmark includes the principal circular stupa made of laterite, where a laterite 6-roomed wihan with a front porch is in front of it. The back of the wihan is connected to a mondop,which resembles a dimmed room. The mondop has laterite gable roofing. The front of both sides of mondop features 2 niches. At the back also features a niche,where a seated Buddha image protected by the seven-headed naga was formerly enshrined. However,it has now disappeared. In addition,this mondop is decorated with beautiful stucco on the back pediment.

From the archaeological excavations conducted at the depth of 7-8 metres in front of the wihan, 15 skeletons were found. These human skeletons are suggested to be datable around the 4 th century - Dvaravati Period,aroun thr 7 th - 11 th century. In addition,evidence yield traces of large brick buildings and many Chaliang wares were unearthed. These are dated to the 12 th centure-Sukhothai era.