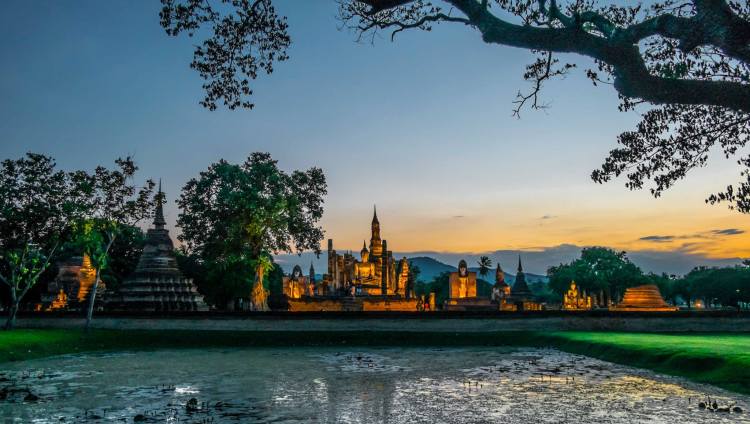 The Sukhothai Historical Park covers the ruins of Sukhothai, which literally means "Dawn of Happiness", capital of the Sukhothai kingdom in the 13th and 14th centuries,in what is now the north of Thailand. It is located near the modern city of Sukhothai, capital of the province with the same name.The city walls form a rectangle about 2 km east-west by 1.6 km north-south. There are 193 ruins on 70 square kilometers of land.There is a gate in the centre of each wall. Inside are the remains of the royal palace and twenty-six temples, the largest being Wat Mahathat. The park is maintained by the Fine Arts Department of Thailand with help from UNESCO, which has declared it a World Heritage Site. The park sees thousands of visitors each year, who marvel at the ancient Buddha figures, palace buildings and ruined temples. The park is easily toured by bicycle or even on foot.

The monument was built in 1975 and situated on Charotwithithong Road,north of Wat Mahathat. The bronze statue of King Ramkhamhaeng the Great (The statue is approximately twice the size of the king standing at 3 metres high) sits on a throne called Phra Thaen Manangkhasila. The right hand holds a scripture while the left hand is in a teaching gesture to the people. On the left side of the throne, a sword is placed upon a tray. The facial expression of the statue is like that of Buddha images of the early Sukhothai period and  clearly conveys King Ramkhamhaeng the  Great's  benevolence, love of justice, and decisiveness. The base relief records the activities of King Ramkhamhaeng the Great as stated in the Sukhothai inscriptions.

The Wall of the Old City

Located in Tambon Mueang Kao, the city wall was depicted in the stone inscription as Tribun or a triple wall. The city has a rectangular plan measuring 1,300 metres wide and 1,800 metres long. It is surrounded by an earthen rampart topped with laterite as the inner wall,with a double alternate moat-and-mound outer enclosure. The moats also served as drainage to prevent flooding. In between each side stand the city gates and the forts in the centre.

Wat Mahathat  is the most important and impressive temple in Sukhothai Historical Park. The temple’s name translates to “temple of the great relic”. The temple was founded by Sri Indraditya, between 1292 and 1347 as the main temple of the city as well as the Sukhothai Kingdom. The design based on Mandala, representing the universe with main principal stupa, built in 1345 to enshrine relics of the Buddha, surrounded by smaller stupas in eight directions. The main stupa has the graceful shape of a lotus bud, which characterizes the Sukhothai architectural arts. Its base is adorned with 168 stuccoed sculptings of Buddhist disciples walking with their hands clasped together in salutation. The eight smaller stupas, of which the four at the corners are in Mon Haripunchai - Lanna style and the four in between show Khmer influence. At both sides of the main stupa has two 9 metre tall standing Buddha images called Phra Attharot. The temple also comprises assembly hall , mandapa, ordination hall and 200 subodinate stupas.

Wat Chana Songkhram is a small temple close to Ramkhamhaeng Monument north of Wat Mahathat in the same area with Wat Sa Si and Wat Tra Kuan. The temple was built in the time of the Sukhothai Kingdom. Today only ruins of the former layout can be seen. The largest stupa is an example of the Lanka - Sukhothai style with bell shaped. Buildings are arranged around the number of smaller stupas. Located on the east side of stupa have Ayutthaya period building. An ordination hall is located on the eastern border of the temple.

Noen Prasat or Palace Hill is the remain of the royal palace of the Kingdom of Sukhothai. The Noen Prasat was discovered in 1833 by Mongkut, who had made a pilgrimage to the north of Siam as a monk. The palace was built on a square base with the dimensions of 200 x 200 meters. Nearby were two small ponds where the archaeologists found the remains of terracotta pipes which probably been used to supply water from city lake to the ponds. In the southwest, there are the remains of a 1.50 meter high brick platform on which they found ashes and bones inside, so It can be assumed that it was the royal cremation place. The Ramkhamhaeng stele was discovered here by Mongkut. He also discovered the so-called "Manangasila Throne", an approximately 1m x 2,50m x 15 cm large slab of gray stone, which is decorated with lotus petals depiction. In the Ramkhamhaeng Stele describes that Ramkhamhaeng erected this stone throne in the sugar palm grove. Mongkut brought his findings to Bangkok.

Wat Traphang Ngoen means silver lake monastery. The temple was probably built in the 14th century, around the same time with Wat Mahathat. Wat Traphang Ngoen is oriented so that it is illuminated by both rising and setting sun. The main structures of the temple are a central stupa, the ruins of a vihara, a large Buddha image on a pedestal in the west and an ordination hall on an island in the middle of an artificial lake, "Traphang Ngoen" (Silver Lake). The stupa is typical 10 meters Sukhothai style in the form of a closed lotus flower stands on a square laterite base, followed by five smaller and smaller levels of brick with a plain stucco, standing Buddha image in niches in the four cardinal directions. An ordination hall lies to the east of the main stupa on a small island in the middle of the lake. In the Sukhothai time, the ordination hall was separated by a water area from the rest of the temple complex to symbolize purity. Today only foundation bricks, some fragments of columns and a pedestal on which probably used to be a Buddha image are visible.

Wat Sa Si is a small temple close to Ramkhamhaeng Monument. Wat Sa Si is beautifully situated in the midst of Traphang-Trakuan lake northwest of Wat Mahathat. Due to its location, the temple is one of the most beautiful place in Sukhothai. The temple has a Lanka styled stupa. The vihara of Wat Sa Si is situated on the east side of the stupa. Further east lies the ordination hall on its own little island. Also a large number of smaller stupas, of which today only the foundations are visible. Due to the similarities in structure and similar Bai Sema landmarks, it is believed today that Wat Sa Si were built at the same time of Wat Tra Kuan and Wat Chana Songkhram.

Wat Si Sawai or Si Sawai Temple is one the oldest temples in Sukhothai. The temple was founded in the late 12th or early 13th century as Hindu Shrine for Vishnu and the place for Thiruppavai ceremony before the liberation from Lawo and foundation of Sukhothai Kingdom. The temple has three well-preserved laterite prang, representing the Hindu trinity, enclosed by a double rampart and a moat. The lower parts of prangs are apparently Khmer, while the upper have been expanded or renovated by Thai in brick and stucco. The central prang is held in Lawo or Hindu-style. Each prang contains a cella, possibly a podium for lingam and crypt. There are few remain stucco work on the top of central prang. Later around the 14th century the temple was adapted to the needs of the Buddhist faith, vihara have been added in the south of central prang. Numurous Chinese porcelains and Hindu god statues had been found in the area, one of artifect is the Shiva statue discovered by Vajiravudh in 1907. The temple is important for study how Khmer art transforming into Thai art.

The Thuriang Kilns are ruins of the old celadon factory, which may have been founded in the late 13th century, are situated near the city moat near Wat Phra Phai Luang. This is a site where Sukhothai celadons were made. So far, 49 kilns have been discovered in 3 different areas: 37 lie north of the moat, 9 to the south, near the city wall, and 3 to the east. The vaulted brick kilns measure 1.5 – 2 metres wide and 4.5 metres long. The ceramic wares found here are generally large bowls and jars; they have a matt yellowish grey glaze, and a design, usually of a flower, a fish, or a whirling circle, painted in black.

Wat Phra Phai Luang was the ritual center of Sukhothai and the biggest temple in the city area. Built in the late 12th century during the reign of Jayavarman VII when the city was still under control of Khmer-Lawo. After the liberation and the construction of Wat Mahathat, Wat Phra Phai Luang lost it main ceremonial role and become Theravada Buddhist temple. Similar to Wat Si Sawai, the temple has three laterite prang, but only one still preserved in good condition. Archaeologists suspect that the three prangs originally stood on a common laterite base. All three prangs were open to the east, with doors flanked by columns which carry a richly decoratedtympanum depicting scenes from the life of Buddha. The doors on the other three sides were so-called "false doors". The tympanum The complex is enclosed by double moat. The outer moat is 600 meters length and is fed by the Lam-Pan River. In the north-west of prang complex are the remains of late 14th century vihara, mandapa and a small ordination hall with eight Bai Sema. The temple is an importance place to study the transition of Khmer art toThai art. since in 14th century the prang has been renovated by adding elaborate stucco in leaves and frames patterns which become the basic pattern of Thai art; however, most of stucco arts are now kept at Ramkhamhaeng National Museum.

Wat Si Chum has a massive mandapa in the middle of the complex which was built in the late 14th century by King Maha Thammaracha II. Inside the mandapa, there is a huge 11 meters wide and 15 meters high seated Buddha image called "Phra Achana", which was mentioned in Ramkhamhaeng stele. The Mandapa has a square base of 32 meters on each side and 15 meters high, and its walls are three feet thick. In the south wall there is a narrow staircase passage which can be used to reach the roof. In this passage more than 50 slates were discovered on which images from the life of Buddha (Jataka) are engraved. These slates are the oldest surviving examples of Thai art of drawing. East of mandapa are the ruins of vihara with column fragments and three Buddha image pedestals. North of the Mandapa are the ruins of another small vihara and another smaller mandapa with a Buddha image. The entire complex is surrounded by a moat. There is a legend that to boost morale of the ancient soldiers and people, the kings went through the hidden passageway and address the people through a hole, making them believed the voice they were hearing was actually the Buddha's.

Wat Chang Rop lies two kilometers west of Sukhothai in the wooded hills as a forest temple. In Sukhothai period the Buddhist monks could be divided according to their way of life in two groups. The first group preferred to live in monasteries within the city and focus on tripitaka study, therefore th